Posted on June 1, 2016 by thelivinghopeblog

What do you do with the contradictions?

It is a wonderful anchor to have the Bible as the inerrant (without error) word of God in a world that is as agitated as the Atlantic Sea in hurricane season.

But, this did pose a problem for me.

An “irreconcilable difference,” if you will.

In the Old Testament, the Father created this wonderful world. Shortly after, it seemed, judgments, rules, quite a lot of trauma, and what sounded like extreme punishments started.

Fast forward to the New Testament and Jesus enters. Now, He is approachable, kind, and gentle. He stands up for the social outcasts, equips and protects his students, meets needs be they physical, mental, emotional and/or spiritual. He’s such a great friend that His presence is eagerly sought at parties. He’s a man’s man–and gracious to women and children in a culture that wasn’t. Then, He faces injustice of the worst kind not for any fault of His own, on the contrary, for all the faults of all of us for all time (John 3:16).

I could not reconcile–make peace with the seeming disharmony–between Father of the Old Testament and Jesus of the New Testament.

It seemed, to me, that the holy standards of the Father were met by Jesus, but was it emotionally safe to approach the One who lives in inapproachable light even then?

One day, many years later, the Holy Spirit solved the “irreconcilable differences” for me.

“The Son. . .is the exact representation of His being.” Hebrews 1:3

The Son (Jesus) is THE EXACT representation of His being (The Father)!
In other words, the Father is EXACTLY represented in Jesus.

The Father was The One working His work through Jesus the Son, touching the outcasts, loving the sinners, rebuking those who thought they had it all together, blessing the children, multiplying the bread, and paying the cost of our sin IN ORDER to bring His family back together.

What about all the extreme measures of the Old Testament?

Light was dawning. Neuropaths were connecting (nerves that fire together, wire together; neuroscience confirms Jesus’ words “as a man thinks, so is he”). Still, there was something more. . .

Aha! The missing link, the Holy Spirit filled in the blank for me, is found in parenting.

There is a language barrier between parents and children.

All this is good. It’s the nature of growth and development which involves God-given curiosity and exploration–but it’s not always safe or best.

The Father is speaking spirit and truth–the language of Heaven. Jesus came to learn and speak the language of man and of earth so He could translate between us (that’s the job of High Priest, to “translate” or “mediate” between God and man).

Add to this mix love and war.

Scrolling through my mental files, the Holy Spirit reminded me of a continuous theme in movie screenplays. When the hero–or top spy–is invincible . . .he or she has ONLY one area that can be touched by the bad guys.

It is their love.

The same happened to the Father. He knew it would when He created what He loved–us and the earth. He was prepared for, not surprised by, His ancient enemy turning His family against Him.

“God [the Father] was reconciling the world to himself in Christ, not counting people’s sins against them. And he has committed to us the message of reconciliation” (2 Corinthians 5:19).

Father knew who His ancient enemy was. . .and who He loved. . .you and I. . .and He sent Jesus to translate and to settle accounts for us. Through Jesus, the EXACT representation, the EXACT picture of Himself, He, the Father, reconciled the world to Himself.

Even in our own internal “irreconcilable differences,” the Father is working to reconcile us–spiritually, mentally, emotionally, and physically.

Whatever is true, think about it. Philippians 4:8 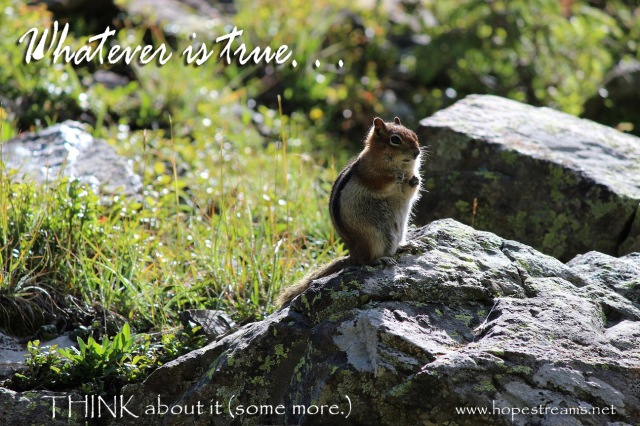 Father, thank You for Your amazing love, perseverance, goodness and grace. I recognize many thoughts and emotions that prevented me from coming closer to You were not true. Give me grace to understand Your language–as You demonstrated Your love by learning my language. I yield to Your love, truth, and grace which are perfectly in harmony through Jesus Christ. Please grant me grace to trust You more. Thank You for not counting my sins against You as I draw closer through the Blood of Jesus that speaks mercy between us so that we can have the relationship You intended. In the name of the Lord Jesus Christ, amen.

Crystal and Stephen Wade, owners of Hope Streams, received a commission from the Father to connect the generations to Him and to each other so that they can: Start well. Live well. Recover well. Build well. Finish well. As part of that commission, they release materials to assist people of all ages in connecting to The Perfect Parent. The couple carries the Father's passion to position the next generation to be grounded in His truth and love so they can fly in the Spirit. To that end, their family launched Let’s Wade In, a media portal, which is both a community for children, tweens and teens to be mentored and a tool for parents and caregivers to anchor students in truth and love so they can fly in the Spirit. They have three wonderful sons. www.hopestreams.net
View all posts by thelivinghopeblog →
This entry was posted in Connected Parenting, Whatever Is. . .. Bookmark the permalink.